Moving to San Francisco? Here’s how coliving can help

San Francisco is often ranked as one of the best cities in the world to move to because of its reported high quality of life.

The economy is superpowered by the many technology companies and start-ups based there. And the unique neighborhoods and cultures within the city, combined with the stunning beaches and natural sites surrounding the Bay Area, means there’s truly something for everyone living in San Francisco.

Founded by Spanish colonists in 1776, San Francisco has historically attracted diverse and enthusiastic people. From the 1849 gold rush to the recent Silicon Valley boom, the Bay Area has always drawn driven self-starters looking for professional and personal success.

If you’re thinking about moving to San Francisco, you probably have some important questions, like what social life is like, how to find new friends and communities, what makes the city so great and the general cost of living.

Read on for some real-life stories and general advice about what living in San Francisco is like and how to make yourself at home.

San Francisco’s international reputation is defined by two major developments in the twentieth century: the rise of the 1960s counterculture and the more recent technological boom in the wider Bay Area.

The rich cultural history is still very much alive in the city, and the various neighborhoods each reflect the unique community that has grown there. Like the notorious microclimates that cover the city, the communities formed in San Francisco and the Bay Area are incredibly diverse.

Coupled with the modern tech-focused startup environment, this city is truly one-of-a-kind.

How to find new friends and social groups

Coliving is one of the most convenient and exciting ways to make new friends. Not only do you get to meet fascinating people from all over the world, you instantly gain a community that you can rely on.

In a city famed as the birthplace of the hippie movement, it makes total sense that coliving has recently taken off in San Francisco. As more and more people work online and become digital nomads, the freedom to choose a living space that also acts as your social haven has created exciting opportunities. 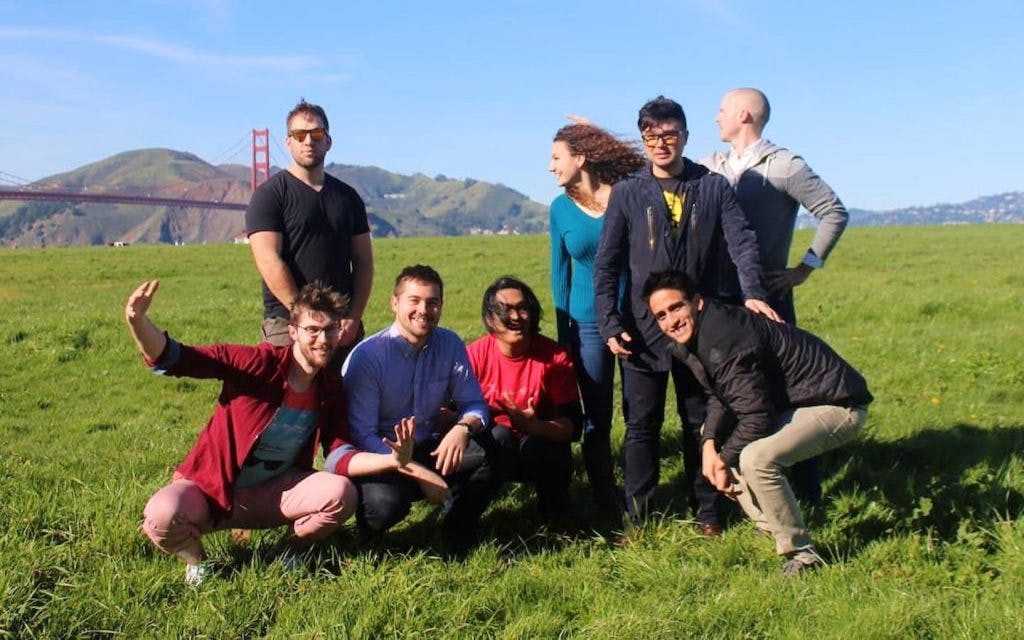 Moreover, these all-inclusive spaces host community events that bring people together. This means that there are weekly (if not more) opportunities to get to know your housemates and form true friendships.

You can also make a foray into the community by attending events through operations like meetup.com, joining an intramural sports team, becoming a member at a rock climbing gym, and more.

Two engineering students from Chile, Diego Valenzuela and Nicolás Acosta, were given the opportunity by The Bridge, an entrepreneurship program that links Europeans to Silicon Valley, to spend a month in the birthplace of worldwide novel innovation. Diego and Nicolás now work together on a startup that provides AR menu solutions for restaurants.

They heard about hacker houses and entrepreneur houses before traveling to San Francisco and were eager to choose them as accommodation in order to get the most out of the Silicon Valley experience. Booking accommodation in a new city requires trust that they felt most websites advertising hacker houses were lacking. They ended up booking through Coliving.com because they believed they would get exactly what they signed up for.

“The community manager, an Irish guy, hosted many events during my stay there, such as poker games, community events and movie nights and was a great source of information regarding where to go and what to do in the area,” Diego said.

“The community was a mixture of locals, travelers and everything in between. It gave us the opportunity to have a wide variety of conversations with all kinds of people with diverse backgrounds. It’s interesting to get a chance to bond with short-term residents that you know you might not see again, as well as having the chance to form deep friendships with those who stay longer.”

In one word: diverse.

If you’re into nature, there’s plenty of beautiful hiking or running paths waiting for you. If you enjoy museums and cultural experiences, the options are plenty. Entertainment, nightlife, food, tourism, annual city-wide events, natural wonders, and more—no matter your hobbies or professional ambitions, San Francisco probably has what you’re looking for.

The many different vibes of the city

The Haight Ashbury district, in the heart of the city, is the undisputed birthplace of hippie culture in America. Though the “Summer of Love” may be over now, the area still has a lot of pride for its roots. Today, it’s packed with modern shops, vintage boutiques, restaurants, and bars to accommodate the growing local population.

For a different kind of revolutionary, San Francisco’s proximity to the ever-growing Silicon Valley is the main draw to the area. It is now the central hub of the most significant tech companies operating today. Tech giants such as Apple, Google, and Twitter (among many more) all originated there and now account for almost 50% of venture capital invested in the U.S.

Fun Facts: If San Francisco was its own nation, it would have the 5th largest economy in the entire world! It also makes up 14% of the U.S. economy as a whole. And, it is home to 3.9 million small businesses that employ nearly 50% of the state’s workforce.

Naturally, entrepreneurs, tech titans, and savvy businessmen and women have all flocked to the area to get a slice of this ever-growing economy. Neighborhoods such as Embarcadero and Nob Hill, bordering the Financial District, host many of the professionals living in San Francisco.

Besides the startup buzz that resonates throughout, San Francisco also has plenty to offer for those looking to kick back and relax. While the Financial District famously closes at 6pm, some of the best nightlife in the city is found in a short ride away in the Castro district. Castro is known as one of the warmest spots in the city, also making it a good location to enjoy the sun at nearby Dolores Park.

How to find local places throughout the city

If you’re in the mood for something familiar, San Francisco has most of the big-name chains that operate throughout the country. But, if you crave something more unique, you can eschew these well-known establishments for the numerous independent shops and restaurants that populate the city—many of which reflect the diverse local communities they’re based in. 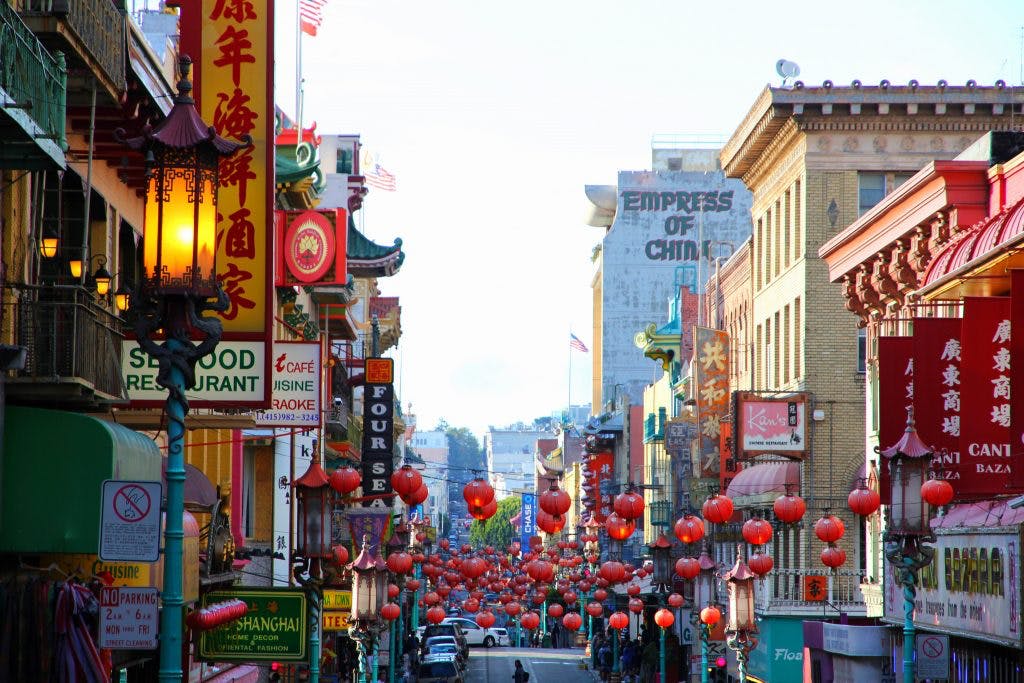 Or, escape the Financial District to neighboring Chinatown, historically remaining the largest Chinese enclave outside Asia. Now attracting even more tourists than the Golden Gate Bridge, it is still home to some of the best Chinese restaurants that San Francisco has to offer.

Head to Mission District, the hub of the longstanding Central American and Latinx communities in San Francisco, to find retail and culinary outlets reflecting the diversity of the local residents.

Essentially, every neighborhood in San Francisco has something uniquely local to offer.

The cost of living in San Francisco

For all the reasons that make living in San Francisco a great place, it has become increasingly harder to live there independently. It’s certainly possible, but as the average rent in the past year reached $3,700for a single apartment (well above the national average of $1,474), it requires quite a high salary to do so.

Of course, you can share an apartment with roommates, but traditional shared leases still in San Francisco average $4,520 for a 2-bed, which equals $2,260 per person—still very high.

Financial experts recommend spending only 30% of your salary on rent. That leaves enough left over for daily living expenses such as commute, food, drinks, entertainment, student loans, credit card debt, etc. Landlords will also look at your income to determine if you’re a borrower who will be able and ready to pay rent on time, or if you’ll struggle to come up with the funds.

Coliving in San Francisco offers an affordable alternative to private rentals, as these spaces charge one fixed fee that includes water and electricity bills, amongst other living costs. The average cost of a room in a coliving space in San Francisco is $1,140 for a shared room and $1,928 for a private room.

Using the same salary from the example above, you’d only need to spend 27% of your monthly income on a shared room within a coliving space.

Pro-Tip: Check out this neat tool to help you calculate how much you’d need to earn in order to afford monthly rent in San Francisco. Then, head over to our coliving spaces page to see what coliving spaces fall within your range. 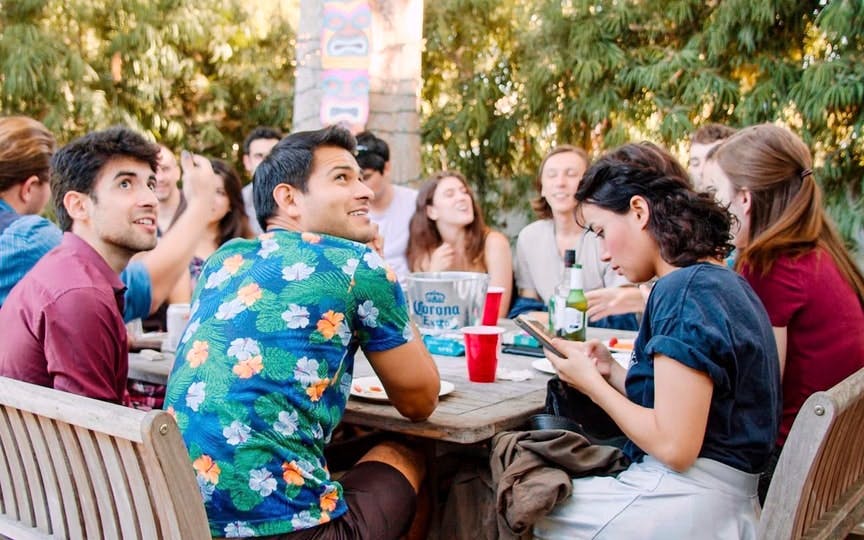 Coliving spaces also promote flexible leases, meaning you can pretty much move in or out whenever you choose. You’re not tied to a 1-year contract like a traditional lease, which supports the flexibility and freedom most young people aspire to achieve today.

Those who chose to colive also gain the stability and security of a managed living space without the responsibilities or stresses of a traditional apartment. Coliving spaces are professionally cleaned, offer fast and reliable WiFi, give you access to a community, provide basic amenities like soap and toilet paper and are fully furnished. Some also have access to gyms and spas; expensive luxuries that are rarely included in traditional rental scenarios.

Even more, many coliving spaces incorporate coworking spaces within the units, making life easy for those who work remotely or run their own business.

Many of the tech start-ups that made their name in Silicon Valley, such as Facebook, began with founding members living and working together in informal coliving spaces.

Coliving provides that same creative environment that inspires productivity for professional pursuits. In a coliving space, you can actively collaborate and create with your fellow residents, something you’d otherwise need to pay for in a coworking, serviced, or traditional office space.

Coliving is also a great alternative for young couples looking to benefit from communal living. While living together as a couple is fantastic, it can still be isolating and potentially lonely in a new city. Coliving communities have private rooms that couples can move into, giving them the privacy they crave while also providing an eclectic community to socialize with.

For these reasons, many companies have already heavily invested in coliving spaces across the city. Whether you’re looking for a large community of driven entrepreneurs and digital nomads or a smaller community of like-minded people, San Francisco has a wealth of options to choose from.

Visit Coliving in San Francisco page to browse our many verified listings and get excited about finding your next home today.

Is Coliving the Next Big Hospitality Trend?
19 Jan, 22
How do new startups afford living in San Francisco?
15 Jun, 20
How Freelancers Can Thrive with Coliving
27 May, 20
The scoop on the pet-friendly coliving scene in the US
10 Apr, 20
Book a hotel room or join a coliving space?
27 Mar, 20