Rooms for rent in Vietnam

Book affordable and hassle-free coliving in Vietnam.
- all amenities included. 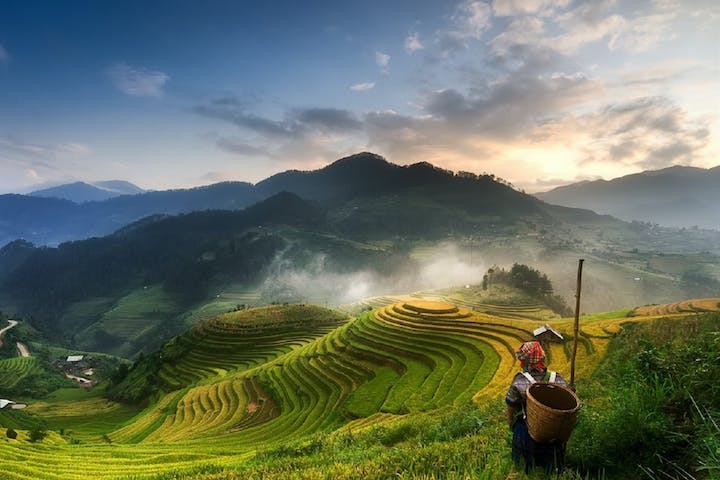 Vietnam, the Southeast Asian nation located on the easternmost point of the Indochina Peninsula, is blossoming with newfound economic vigor after decades of war and strife ravaged the country over the past century.
With characteristic humble steadfastness, the Vietnamese people have slowly picked themselves up, catapulting Vietnam into what is now considered as one of the “hip” must-see countries for everyone’s bucket list.
Vietnam is ranked as the sixth cheapest country to live in Asia and 37th worldwide on Forbes’ list. This makes the country very enticing for tourists who are traveling on a tight budget.
There are lots of activities to do while in Vietnam. You can start by checking out one of their eight UNESCO World Heritage Sites that range from natural attractions like Halong Bay and the Phong Nha Ke Bang underground complex, to cultural landmarks such as the Hue Complex, Hoi An Ancient Town, My Son Sanctuary, as well as the Ho Dynasty and Thang Long Imperial Citadels.

Owing to their colonial past, French is spoken by 5% of the population aside from the Vietnamese national language.
Visitors who wish to partake in delectable yet healthy food will be pleasantly surprised with the various culinary delights Vietnam has to offer. Vietnamese cuisine is regarded as one of the healthiest in the world.
Meals usually come with rice in various iterations or with pho (Vietnamese noodle soup consisting of broth, meat, rice noodles, with local herbs and spices). For those who are adventurous enough, you can try their traditional dish called tiet canh, which is raw blood pudding mixed with cooked meat (usually pork or duck).
There is a vibrant Vietnamese street food culture, which is widely regarded as among the best in the world.

Although you have to be 18 years old to legally purchase alcohol, there is actually no legal drinking age limit imposed anywhere. If you can manage to get the booze, then you can consume it with no worries.
For those who want to bask in the sun, the country also boasts of idyllic and gorgeous beaches dotting its approximately 3,400 km of coastline. Whether you just want to lay on the beach, enjoy the surrounding scenery, or get out on the water, there is bound to be an activity that you can enjoy in this tropical paradise.
Vietnam offers great coliving spaces spread throughout the country for digital nomads who want to combine work with relaxation.

Vietnam is still much less touristy and more affordable than the other South East Asian destination Thailand and in recent years many remote workers have chosen coliving and coworking spaces in Vietnam for a better and cheaper lifestyle.

From the former French spa town Sapa in the northern mountains to the café culture of Hanoi, the famous Halong Bay and the lampion festival of Hoi An down to the unspoiled beaches of Quy Nhon and the tropical island of Phu Quoc there are so many unique locations digital nomads can explore in Vietnam.

From hiking and motorbiking across the country to affordable spa and beach resorts, trendy Vietnam has something to offer to everyone.

Here are some fun facts about Vietnam:

- Almost 100 million people live in Vietnam making it the 15th most populated country in the world.
- Vietnam was occupied by China for 1,000 years from the 2nd century BC.
- People lived in this area for about 500,000 years according to archaeologists.
- Vietnam is the world’s biggest exporter of cashew nuts and black pepper. The cashew fruit is also eaten here.
- Vietnam is the 2nd biggest exporter of coffee and coffee culture is big here. Vietnamese drip coffee with condensed milk and egg coffee are both a must-try for visitors to Vietnam.
- There are almost 400 rivers in the country.
- The local cuisine is incredibly varied: Pho and bun cha noodles, lots of seafood, banh mi sandwiches, nem spring rolls and banh xeo pancakes are just some of the popular dishes, but every locality has its own specialties.
- There are eight UNESCO World Heritage sites in Vietnam.

Long-term and short-term visitors to Vietnam can expect to discover a wealth of local ancient and recent history and culture as well as very welcoming locals. Vietnam has a reputation as one of the friendliest countries on Earth.