Get the best deals on rooms and beds!

I lived here along with 7 other interns while I was doing an internship in San Francisco. Although I had some worries about living with other people in the same room, I can confidently say my experien...

Clean and well-maintained place, right in the heart of the city. Great way to meet fellow people and enjoy the San Francisco life. Lots of parks, malls, bars at walking distances. Kind and thoughtful...

This is a perfect living space to work and relax in San Francisco. Its location to the city and transport system is exactly what I wanted when I moved in. It is situated outside a Muni transit stop th...

Overall good experience, not everyone followed the rules and sometimes left dirty dishes in the sink, but in general the place was very clean and the manager and other guests were really nice, cool en...

Coliving is a modern form of shared housing for like-minded people to live, work and play together. Fully furnished, specially-designed living spaces create an inspiring environment for people to interact and share experiences.
The biggest value of joining a coliving space is access to the community.

San Francisco is regarded as one of the most popular and exciting places to live in the world. It’s no wonder that coliving in San Francisco is on the rise. Surrounded by beautiful beaches and endless vantage points, San Francisco’s close proximity to nature makes it easy to find respite from the bustling city life.

Why San Francisco is an exciting place to be

Its rich cultural history has generated an open-minded, diverse, financially ambitious and creative community. City dwellers often rank as some of the happiest and healthiest people compared to those residing in other American cities.

San Francisco is brimming with entertainment and activities to partake in within the city and surrounding areas. Full of world-renowned restaurants, a vibrant spiritual presence, tons of entertainment in the form of live concerts, plays and musicals, an array of multicultural museums, and impressive outdoor activities, such as hiking through the famous Muir Woods or visiting Golden State Park, the options are truly endless.

If you’re interested in coliving in San Francisco, read on to learn more about this magical city, and why coliving is right for you.

• San Francisco is famous for all of its food, but the crusty sourdough French bread and bay shrimps are top of the list for must-try foods
• Speaking of delicious crusty sourdough bread, the city is also famous for its clam chowder served in a warm bread bowl—it’s literally teeming with delicious bread bowls
• San Francisco is home to Ghirardelli Square, where you can take a tour of the famous chocolate factory and eat free samples to your heart’s content
• Every May, the city hosts the “Bay to Breakers Footrace” where over 60,000 runners compete not only in speed but also in costume choice—it’s regarded as one of the most fun, entertaining and creative events in the world
• San Francisco is ripe with Victorian architecture, or colorful homes built between 1840 and 1900, and the famous "Postcard Row" is a must-see
• The Golden Gate Bridge wasn’t supposed to be orange, but once the architect covered the iron with orange primer, he decided he liked it and kept it as is
• At San Francisco’s Pier 39, you can watch hundreds of sea lions nap on the docks in the marina
• The average age of residents in San Francisco is 38.5 years old
• San Francisco is the only major city in America to guarantee that a home will never be further away than half a mile from a public park
• Many of San Francisco’s neighborhoods experience different weather patterns, a phenomenon known as microclimates
• There are 90 colleges within a 25-mile radius in the Bay Area
• San Francisco hosts America’s largest annual wine competition and the public can sample the winner’s wines for free at a public tasting—yum!
• If you’re a movie buff, you can attend one or more of the 50 film festivals SF hosts each year

The startup scene in San Francisco

Apple, Google, Hewlett Packard, Facebook, Adobe, eBay, Oracle, Twitter, Intel, and so many more. San Francisco and its surrounding areas are literally teeming with technology companies that are listed in the infamous Fortune 1000.

This geographical incubator was made possible in large part thanks to a program at Stanford in the 1950s. It was at this time that professors in the school of Engineering vowed to create their own companies, sparking a creative nerve center.

The brilliant university scene in San Francisco was and still is full of inspired minds with their own ideas for companies. Because of this, venture capital is constantly flowing into the area in order to satisfy a need for innovation.

In fact, in 2019, the Bay Area received almost 50% of the entire amount of venture capital invested in American businesses. If you are looking to work for a startup or start your own business, San Francisco is the best place to be. With no shortage of funding, companies are looking to expand their teams and make their mark on the world.

Coliving environments in San Francisco are perfect for entrepreneurs and driven young professionals who want to feel inspired and enlightened and, most importantly, build their professional and personal networks.

Choosing a neighborhood in San Francisco

As there are so many different neighborhoods, it can be difficult to decide where to rent in San Francisco. Each neighborhood offers something unique that makes it stand out. There are those that are best for students, others that are tailored towards young professionals, ones full of nightlife and entertainment and others that reside on the quieter side.

In order to pick the right neighborhood for you, you need to understand your priorities. Do you care more about being near the BART (public transit) line, would you rather walk, or do you have alternate transportation? Do you want to live nearby to where you work? Are you a student who needs to live close to your University? Do you prefer having easy access to the bustling nightlife, or staying in a quieter area? 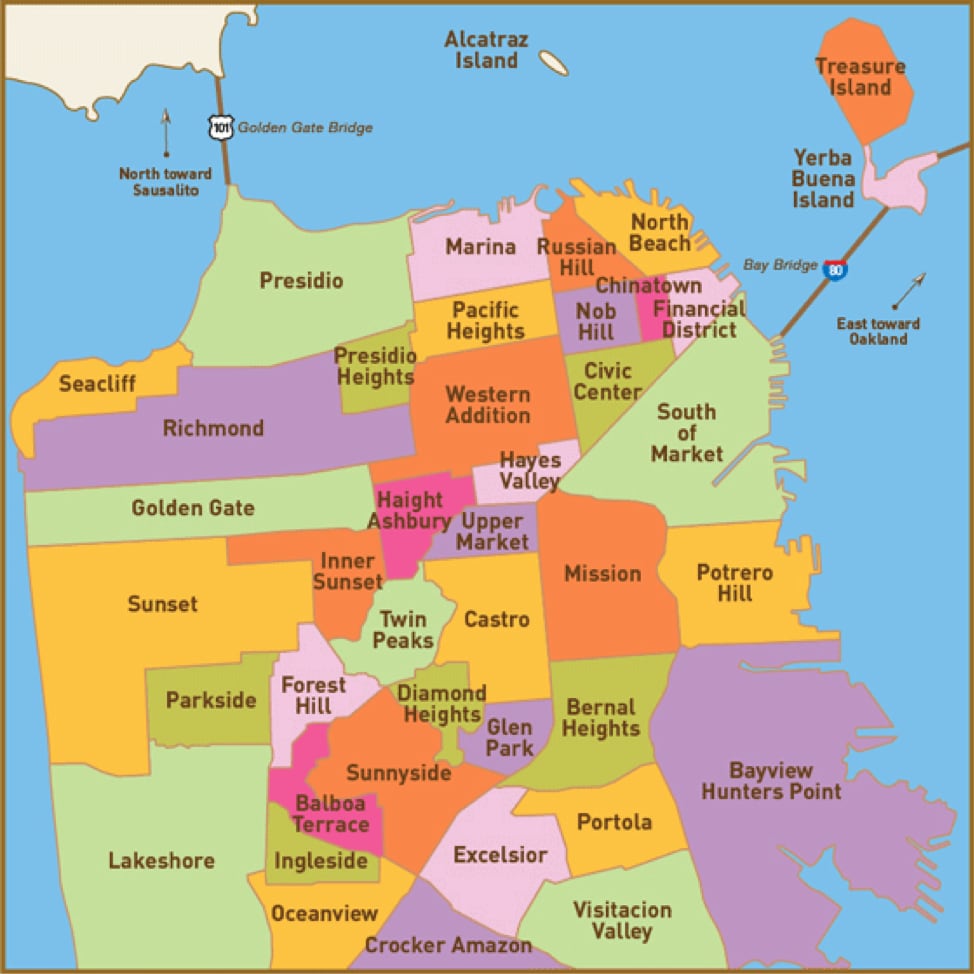 The Haight Ashbury district is smack in the middle of the city center. It’s one of the most famous districts and is home to the “Summer of Love” movement from the late 60s. It’s full of picturesque Victorian homes and still boasts a funky hippie vibe. There are endless shops, restaurants and entertainment options to satiate your needs. You can also hike to the top of Buena Vista Park to take in some of the most breathtaking views the city has to offer. This neighborhood is great for young professionals looking to build their network in the center of it all.

The Embarcadero is also a great choice for young professionals looking to stay near the financial district. This district stretches from the famous Fisherman’s Wharf area to the China Basin, which is an office complex on the border of SoMa. Residents can enjoy an evening stroll along the waterfront, visit the Bay Lights, which is the largest light installation in the world, take in the beauty of the many outdoor statues and art exhibits, shop, eat, drink and enjoy the vibe.

Given that it’s one of the most walkable cities in America, the top five ranked walkable neighborhoods in San Francisco are: Chinatown, Downtown/Union Square, Lower Nob Hill, The Tenderloin, North Beach.

For Students and Interns

If you enjoy the nightlife scene and want to stay in an area that’s open late, consider Union Square. It’s centrally located, but a bit farther away from the Financial District, which is famous for shutting down after 6pm. The Castro neighborhood is also known to have some of the best nightlife in the city.

The Castro is infamous for its rainbow lined streets and rich history. It’s also known as one of the warmest places in the city. On warm, sunny days, nearby Dolores Park draws a crowd of people relaxing, playing games, and conversing with new and old friends alike.

SoMa offers a bit of everything. It’s so large, that there are actually both quaint as well as middle-of-the-action parts of the neighborhood. You can enjoy the quiet around South Park, or take part in the nightlife further west. Oracle Park, home of the San Franciso Giants baseball team, is also located in SoMa.

If you’re a student, you have an array of options. As there are 90 colleges within a 25-mile radius in the Bay Area, the city is well prepared to house scholars. The University of San Francisco, or USF, is located between the Golden Gate Bridge and Golden Gate Park. The following neighborhoods house the majority of USF students: USF/Panhandle, Inner Richmond, Outer Richmond, Inner Sunset, Outer Sunset, Cole Valley, Laurel Heights.

Here’s a map that shows which districts the largest Universities in San Francisco are located in:

A cost analysis: Coliving vs. apartments for rent in San Francisco

San Francisco is one of the most expensive places to live in America. Rent costs have been steadily rising for years with no sign of slowing down any time soon.

Recent statistics report that the average rent in San Francisco is $3,733/month. That’s several thousand more than the national average, which is $1,476/month. Compared to other large American metropolitan areas, it’s only slightly higher, averaging a few hundred more per month than New York, for example.

With such high prices, the act of finding high quality, centrally located apartments for rent in San Francisco is an incredibly difficult task for interns and young professionals.

Luckily, there is a solution: coliving spaces. Coliving spaces perfectly blend the benefits of more expensive spaces with the advantage of lower rent. They do this by making their apartments available to those who value sharing resources and space, thus reducing costs.

These apartments are often managed by a team of people invested in the community they host. The furnished spaces include many amenities and perks, such as weekly cleaning services, free WiFi, and stimulating community events, conveniently bundled into one fixed fee.

Most importantly, coliving spaces are perfect for people who don’t want to compromise on quality or location and would also benefit personally and professionally from embedding themselves into a coliving community.

The average cost of Coliving.com’s spaces in San Francisco is $1,233/month. Coliving in San Francisco is significantly more affordable than traditional options and gives you the freedom to choose where you’d like to live without having to sacrifice your quality of space or life.